a priest's musings on the journey

Sorry, i forgot to give the address to the new blog...

For a while I blogged at a priest's musings on the journey, but then the inspiration to write there left me, and I have left it fallow for several months. I will continue to post an occassional sermon or commentary there, butI am refocusing my energy on a new blog: creavit.Here I will share some of my poetry, short stories, paintings, and the music and art of friends as well as favorite pieces of mine. I will also offer planning suggestions for Sunday Mass and Holy Days. Thanks for stopping by and checking this space out. I hope the writings and images there will aid you in your quiet times and in your prayer times.
:: posted by Padre Rob+, 7:52 AM | link | 1 comments |

Returning Glamour to the Organ (Thanks james)

A great story on a young organist who is trying to change the way we think about organs and organists... If you missed the story on NPR weekend edition, check it out http://www.npr.org/templates/story/story.php?storyId=96085462
:: posted by Padre Rob+, 12:14 PM | link | 1 comments |

A tanka is a Japanese poem which tells a story or expresses a complete idea in 31 syllables, and 5 lines. The first and third lines contain 5 syllables, and the others contain 7: 57577. Here are a few that I have written over the last few days during my queit time.

on the seventh day
God gave birth to harmony
repose, peace, and rest
potential for renewal
completion of creation

Tanka on the Blessed Virgin Mary


Tanka on the Theotokos

Tanka on Our Lady of Guadalupe

sealed by the Holy Spirit

and made God's own forever

all forgiven, all belong 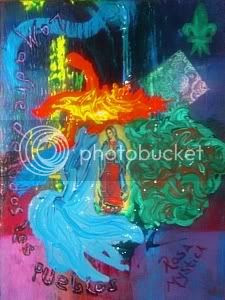 I've had a burst of creative energy lately. This is the result of some experimenting with painting.

why some glbtq people decide not to come out

It's sad, unbelieveable really, that in 21st century America many gay people remain afraid or unable to live their lives openly and freely- not only in the church, but also in society. Gays and lesbians who live in places where there is greater tolerance, acceptance, and protection of civil liberties often lose touch with what life is like for their peers who live in more hostile areas. These closted men and women are often co-erced, forced, or guilted into coming out- and tragically are sometimes outed (a most disgraceful act especially when done by another gay person.) But the sad truth is that there are some gay people who can not and should not come out- and their decision to protect themselves and the ones they love should be honored, and those who are out should be present with those in the closet with compassion, understanding, and respect until that person knows its the right and safe time and palce to be fully known.

There are gay priests (and bishops) who would be unemployed if they were out- (the dicoeses of Virginia, South Carolina, Quincy, Fort Worth, and Pittsburgh come to mind) not to mention the subject of the vouyersitic, predatory media eager for its next victim to exploit. Is it fair for a faithful priest to be forced to decide between his/her calling to serve God as a priest and his/her sexual orientation? No, but that's the reality for many. There are gay parents who would lose all contact with their children, and gay children who risk being outcasts in their own families if they came out. Is it just to make a father choose between his son and his lover? No, but judges force this decision all of the time. There are gay people who would be openly ridiculed at least, and assaulted or even killed at worst if they were out in their communities. It's easy for those on the other side to judge the ones in the closet and advise them to just leave their communities and judging families- but it ain't always as simple as that. No one wants to be rejected by those they love, and sometimes it just hurts less to hide one's sexuality so that one can feel the love and 'acceptance' that one needs. It's just too scary for some people to walk away from those who would reject them if they knew the turth; it takes a courage and a strength they don't have. Perhaps, in time and with God's grace, those in the closet will be able to come out, and I even pray be fully accepted. Until then, we should support others where they are, and love them, instead of judging them for not making the choices that we would make.

Philo once said, "Be kind, for everyone you meet is fighting a hard battle." Living in the closet is a struggle. It often feels like one is trapped in a prison. One lives in constant fear of being found out- be kind to those who live with such oppression. One day they will come out; one day they will find liberation, peace, and acceptance. Only they know when that day is- and only they can choose when to leave the closet. Until then, instead of attacking them and adding to their pain by judging them as "abusers of Christ" who "refuse to walk in the Light"- it might be better to encourage them, support them, and wlak with them until they are able to take the hand of the loving Christ, or the hand of a beloved friend, and walk into the glorious freedom of the sons and daughters of God.
:: posted by Padre Rob+, 12:11 PM | link | 1 comments |

Just two hours before the time of his execution, the US Supreme Court, meeting in an emergency session, issued a stay for Troy Anthony Davis. They had agreed earlier to hear his case next week, and yet the State of Georgia was still going to kill him tonight. Thanks be to God for this last minute move. They may have saved the life of an innocent man.
:: posted by Padre Rob+, 5:56 PM | link | 2 comments |

Troy Anthony Davis to be executed tommorrow. Speak out against State Murder

Troy Anthony Davis is scheduled to be murdered by the State of Georgia tommorrow at 7 PM. It is abhorrant to execute a person for crimes in any case, but especially so when there are questions concerning guilt. Go to Amnesty International's website to find more information about how to write to the Georgia Board of Pardon and Paroles and ask that Davis be given clemency.

Offer a prayer for Troy and his friends and family.

Name: Padre Rob+
About Me: An Episcopal priest who tries to follow the path of peace and live his life in a way that is faithful to the teachings of Christ who taught us to Love God and to love everybody else as we love ourselves. 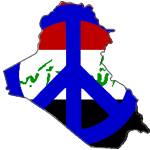 I'm one of One Million Blogs For Peace